I heard the cry over the sound of the shower.  Someone was here to see me.  They don’t knock on the door, but just start calling my name as they near the house.  It makes sense, since doors on bamboo huts are not conducive to knocking. My door isn’t bamboo, but the custom is the same.

It was the end of a long day, and I was not prepared for company, but I called out an answer — wishing I could remember the Thai word for “shower.”  I hurriedly dressed and went out on the porch.

I knew it wouldn’t be the children, because they call me “Grandma.”  It was the young mother who has been here with her two babies this week. (Her baby boy has the unfortunate name of Pee La Pot.) Her phone was out of juice and she wanted to borrow a charger.  It’s amazing how much you can communicate with little or no common language!

She’s a friendly woman, who is all smiles despite the fact that she came to give up her children.  I can’t imagine handling such a devastating situation so cheerfully.  As it turns out, we can’t take the children, since we are not set up for babies. We don’t have enough workers or a safe place for them to stay.  As we were trying to come up with a solution for her, her mother called and told her to bring them home.  Her family would help her.  We understood from Anond that she had returned home already, but then we misunderstand a lot of things.

In fact, this day began with a misunderstanding.  We thought we were going to Burma, so I was all packed and ready.  But instead Bro. Anond told Paul he would meet him at Pa Sak #1 for the church service.  Or at least that’s what Paul thought.  It turned out to be another misunderstanding.

Meanwhile, I rushed to prepare a Sunday School lesson for 15 kids, which I would be teaching instead of traveling to Burma. I don’t have a helper, so preparation is key, especially since I have to teach the story in a mixture of Thai and English.  I do it, and they seem to follow along, but it takes a bit more work. I have to decide in advance how much of the story I can tell without getting into words which are out of my depth.  Then I have to come up with a craft.

I have spoiled them by having a craft every week.I loaded up on leftover VBS crafts when I left Oklahoma. They had been cluttering up my craft closet for years, and the new teachers were happy to see them depart, I think. The kids LOVE them.  Now I am out of leftovers, but will have to keep coming up with crafts — not my strong point.  Today I had about 30 minutes to come up with and prepare a craft.  In the US this wouldn’t be a giant problem.  1) Look online, 2) Pick a craft that involves only items I already have or can get quickly at the Dollar Store, or 3) Figure out something from my card-making supplies.  Here I can look online, but have no place to buy last minute paper plates, etc. I also have limited card-making supplies, since my favorites are in the attic at Sherwood. (Wouldn’t fit in the suitcase. Everything seemed to expand at the last minute.) My others are scattered around with various friends and relatives. I did get here with a couple of punches and some paper. Voila!  Lion necklaces to go with Daniel and the Lion’s Den. They were a big hit. Whew!

We sang some songs in English, using lots of motions. They had already been sitting still for a two hour service before going to eat breakfast and returning for Sunday School, so they didn’t have much “sitting still” ability left.

They didn’t remember the story from last week, which was discouraging.  “Who (khrai) is this?” I asked, showing the picture.

“No, David,” I replied. Sandy’s eyes lit up and he made the hand motion of a sling. Okay, someone got something from the lesson.  We reviewed and went on to the new story, which they seemed to follow.

I am always happy when I can think of words in Thai to insert into the story to give them clues. Otherwise I just have to use my pictures and lots of expression. (I do a mean lion!)

My pictures are an aBeka set I bought on eBay years ago.  What a good investment!  I even used them for the ladies one week, and they were enchanted.  Anond suggested I use them every week, but my limited set doesn’t extend to people like Rahab and Dinah.  I miss my big through-the-Bible set that I used at Sherwood.  Maybe I will invest in those someday.

Meanwhile, we sang, had the story, did the lion necklace craft, and colored. Then they played with the toys until time for lunch at 2 o’clock. Sunday mornings are a special time, and I love it!

Paul came home about the time they were leaving. It turned out that he and two of the young preachers did go to Pa Sak #1, but Bro. Anond did not show up.  Evidently another miscommunication.  The pastor seemed to expect Paul and urged him to speak, even though he didn’t have an interpreter.  Paul says they had a great time and he enjoyed the travel with the young men.  However, he had a message to preach that was a “fire in his bones” and was frustrated that he couldn’t give it to them.  He has been working hard on Lahu.  Maybe he will be able to preach without a translator before too long. Please keep praying for him about this.

The kids came back after lunch to ride the bicycle, but it was gone.  Paul had told the young preachers that they could ride the bicycle any time. They accepted this invitation with joy. Alee, who grew up here at the children’s home, has never had a bike and loves to ride it at every opportunity.  Unfortunately, Paul neglected to tell him to leave it here on Sunday for the little ones. We have earmarked funds for more bicycles.  Maybe we can get them this week.

To make up for it, Paul played Legos with the kids.  I caved and let the kids play on my iPad.  Sigh. I will regret it. They played nicely, taking turns, but I am very dependent on it.  Makes me nervous to hand it over to the kids.  Once they had it, there was no getting it back.

Finally they left to eat supper and we both collapsed, exhausted. Sundays remind me of the wonderful times we have had with our grandchildren. And how spent we felt when they went home!

Paul has been working and walking and praying all evening. I regret to say that I relaxed with a book and took an (interrupted) shower.  I started to write a post on Facebook, but it grew so long that I decided to go ahead and write a blog post.  I’ve written about a typical week day, but it occurred to me that you might like to see what a Sunday is like.  Thanks for joining us! 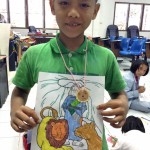 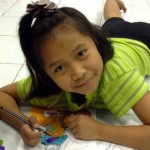 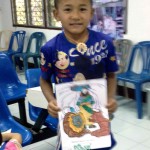 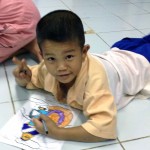 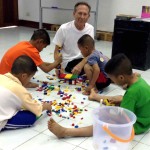 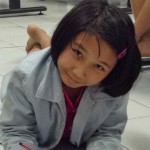 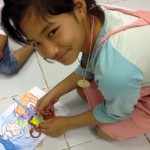 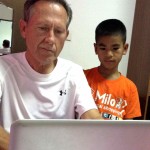 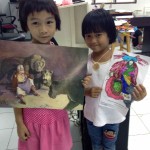