Friends from Near and Far Away

The boy’s brown eyes lit up and a smile broke across his grubby face. The stuffed toys we brought were unceremoniously

A ladies’ group from a church in Oklahoma made hats for us and had included some extras like scarves and these crocheted animals. I had reserved the animals because I feared the other groups we visited would be too large and there wouldn’t be enough to go around.  There’s nothing sadder than the face of a child when the “goodies” have run out!  That week we were at Hoe Deua, one of the most difficult to reach villages, and I was pretty sure we would have enough. We did.  There was one toy left over after the church kids had each claimed one.  I gave it to our cook’s baby grandson, David,  who lives with her now.  Thank you, ladies, for making the day special for these kids!

The Thanksgiving season is winding down.  New Years celebrations are coming up and typically last through January.It’s a busy season, but we are always glad for the extra opportunities to be in the villages.

We followed the crowd up the steep hill, past the pigpen and the bamboo houses on stilts, up to the church building at the top.  A good-sized group crowded into the little building.  The usual amount of racket went on from the kids — acceptable in Lahu services — but the worshippers listened eagerly as Paul preached and Bro. Ai Donkham interpreted into Lahu.  The message blessed my heart as Paul spoke of the name of Jesus. What a blessing to think of the beautiful, the powerful, yet the simple name of Jesus!

After the service we gave hats to the all children. Denise has been busily crocheting hats to add to my dwindling stash, so we had more than enough to go around. The kids were so happy with both hats and toys!

We climbed back down the hill and mounted the ladder-like steps to the bamboo house of one of our Lahu friends.  They

Then medicine time. A mother brought her toddler who had a burn on his thumb. A firecracker exploded in his hand before he could throw it, they said.  (Why was this tiny little guy throwing firecrackers? Who lit it? Why…..? ) I bit my tongue and got down to business. The dressing looked clean, so I just supplied the mom with Betadine, Silvaderm cream and a supply of fresh bandages.

Strange rashes always appear in the medicine line in this village.

“How long have you had this?” I asked a young man as I examined the thick, crusty white rash on at his hairline.

A similar-looking rash appeared on the foot of another man and the arm of a young woman. I’ve treated it before, but I don’t know what it is.  Nothing I’ve given them appears to have helped, but I gave out more anti-fungal/antibiotic cream.

members hadn’t all been seen before the rest of the village heard that we were there and rushed up to get medicine. They tend to be grabby in this village, but Paul, Denise and Kimmy stood guard over the boxes of meds so that only people who stood in line and told me their symptoms took home medicine.

“I want Paracetamol,” one lady said in Thai. My Thai is still basic and I speak it tentatively, but that was well within the limits of my understanding.

“She has a headache,” was the translation my interpreter gave. Not what she said, but I got it.  My interpreters know we can’t give out “just in case we need it later” medicine, but they also know the situation. There is not even a convenience store for many rough miles. If you don’t have medicine on hand, it’s hard to get any when you need it. I handed her the bag of Paracetamol, which is a pain reliever similar to Tylenol.

At last, after another round of hand-shaking and cries of “Aboo-ue-jah” (which means, “hello,” “thank you,” and “goodbye.”) we climbed back into the truck and hit the dusty trail again.

I staggered, exhausted, into the house when we finally arrived at home. I only had a minimal part of the days’ service. Paul drove a total of three hours over the dreadful road and three more on the highway — and preached between the two grueling drives. I don’t know how he does it, except by the grace of God!

In other news, I am now the proud owner of a Thai Driver’s License!  I’m not planning to drive anytime soon, but I’m thinking of tackling short distances when we move to Mae Sao. The traffic there is not as intimidating. Besides, the two houses we will be renting are two miles or so apart. I sneaking suspicion that I will  always be stuck at the wrong house and either walking or waiting for someone to come and fetch me.

Denise got her license at the same time, but Kimmy accidentally left her American license in the pocket of a coat, which is still in US. She will have to take a driver’s test to get hers.  All Denise and I had to do was watch a video and pay a fee.

Kimmy and Paul are taking the training and the test to get motorcycle licenses this week. It’s a two day process, so it will consume a lot of the week for them. It will be handy, though, to have more drivers. And getting places by motorcycle is much faster than going by car. I thought about learning to drive the motorcycle and getting a license, too.

“If you can ride a bicycle, you can drive a motorcycle,” Paul told me.

But I remember all the times I fell over or ran into things on my bike.  Maybe not.

Dan and Eloise Stinchcomb have family in Thailand, too.  Their son is a principal in an international school here. We went to college with Dan and Eloise — and I worked with them both in those far-off days, earning tuition money at Pizza Hut.  We always look forward to meeting up on their annual visit to their grandkids and had a wonderful visit this week.

It’s hard to say goodbye to friends, but we know that time passes quickly and we will see them again before we know it.

We look forward to the next years serving the Lord here in our new, permanent location. We plan to make another visit to Mae Sao while the kids are out of school next week. We can’t wait to get started working there! We have one small house already rented and will start gradually moving our belongings there.  We plan to be moved by the end of March.

Please pray that the purchase of the property will go through smoothly.  So far we’ve hit a couple of snags which have taken time to iron out.  Then we have to raise the money to begin building.  Whenever anyone asks about our greatest need — we tell them it’s the building fund! We are thankful for the special offerings that have come in so far, and are trusting the Lord to provide.

He has been faithful in providing all our needs so far — usually from sources we least expect! We know He won’t let us down. He is good! 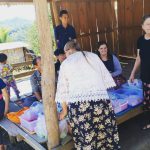 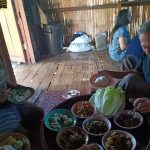 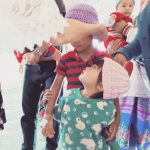