Laughing little faces — how my heart goes out to each one of these precious children!  I am, at last, beginning to sort them out and getting to know them.  Yo Bot is eleven and spunky. Chi Chi is ten and shy.  Pa La Di and Ma Li are giggly girls of eight and ten, and so on.

I’m thankful that I can teach them English, because that is how I am getting acquainted with them.  They are picking it up quickly, but not without some confusion.  It is a challenge to try to teach people who know no English at all when you have no translator.  I want them to respond to a question, and they repeat the question like little parrots. They are good parrots, saying the words easily and exactly right.  By lots of charades, we generally get there, but it isn’t easy!  Last night I wanted to teach them, “How old are you?” and the response, “I am ___ years old.” I figured it would be useful.  Besides, I wanted to know how old they are.  They are often so small that I tend to think they are younger than they are.  What a time I had getting that across!  We eventually made it, though.

Then the high school kids came in.  They get home from school so late that I only have them for a few minutes before the evening preaching service starts at 7 o’clock.  They have had English in school, so we are able to progress a little easier, but the sounds are harder for them to say correctly, so it is a trade-off.

My adult class is hardest of all.  I have just two students, and they are the ones too slow to keep up with the beginner class.  We soldier on each day, making baby steps of progress as they struggle to form the sounds with mouths full of bad teeth. Well, not too full.  Poor I Sa only has them here and there.

Of course, my classes are of the greatest interest to me, but I must remember to post about the really important classes, those Bro. Camp and Paul are teaching.  I can hear them from my room where I write and work.  They are both really drilling them on the essential doctrines of the faith.  They have such a passion to get these men truly grounded and stable.

So many of our earlier, promising students have fallen by the wayside.  Part of it is, no doubt, a problem with the culture.  It’s much like the culture of ancient Corinth — and the struggles these men have are similar to those we see in Scripture.  Immorality is accepted as normal.  Often the couples don’t marry, but just live together.  When the going gets rough, they jump ship and find someone new.  I know, this is the trend in America, too. Here, though, the girls are so young — often as young as 13 — when they leave home.  We’ve seen young, promising preachers snared by the lure of sex and an attractive young lady.  We were crushed to find our beloved Matthew, with the shy grin and the heart for the Lord, has fallen.  Anond says he has repeatedly tried to contact him, but Matthew is ashamed to come back.  Please pray that our merciful God would forgive and restore him!

We have other young preachers, but we also have older, more mature pastors here for teaching and training.  Se Bat pastors two churches, as well as working as a houseparent here at the children’s home.  Outspoken and colorful Ja Shaw pastors the largest church at Pa Sak.  Ja Law, Ja Hay, and others are also established pastors.  Philip, or Nio Chai, as he prefers to be called, is new, but more mature in age as well in the faith.  He often comes after school to talk with Paul. He speaks English well enough to ask good questions and to follow Paul’s answers.

And sometimes I hear the men outside my window at break time.  Yesterday Ja Shaw and Nio Chai were discussing some aspect of theology, evidently.  “Old Testament,” I heard Ja Shaw say in the midst of a flood of La Hu.  I also caught “Matthew,” and “John,” and a few other words, too, in the discussion.

And then there is Simon, who is a cut-up, but still a promising young preacher.  He is working hard on English and is making good progress.  Brother Anond told us he made up a song and sang it at one of the festivals — all about how he wanted to get married but no girl would marry him.  “He very funny,” Anond said. “Everybody laugh.”

Simon was at the school a few years back and has returned this year.  There is a group that has lured away many of our people. They are some form of Korean Pentacostal who believe that once you are saved, you can live as you please.  Immorality, drunkenness, and drugs are not an issue to them.  You can see how such a group can be a snare, particularly to the young men who are struggling against sin, anyway.  Simon fell prey to this group, but recently returned.  He wasn’t happy while he was living that way, he said.  He knew it must be wrong, and he returned.

And that’s perhaps the best test of true salvation. He might fall, but couldn’t bear to keep living in sin, although his “church” assured him he was fine.  God’s Holy Spirit convicted him and wouldn’t let him continue on that path.

For those who are wondering, we’ve had no more trouble with ants.  When they venture as far as our porch, we sweep them out and spray vinegar along their paths.   We are settling into our tiny new home well.

For Internet.  Paul and Brother Anond will be checking into other options for Internet, since we may be gone before they repair the phone line and get WiFi out here.

For the men — that would raise up stable, strong men to lead the people.

For Matthew, that the Lord would bring him back and make him strong. 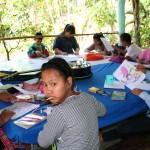 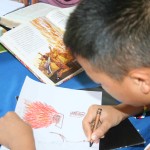 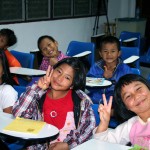 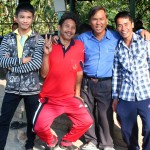